skip to main | skip to sidebar

Being that the TX panhandle has been so dry and void of storms this year, it has been a very frustrating chase season, without a doubt. It's past mid April, and until today, I've only been on 3 chases, and one was a huge bust. With a bit of energy coming over the Northern TX Panhandle, and Td's in the upper 30's and lower 40's, a few thunderstorms were forecast for this region. They weren't going to be severe, but at this point, I didn't care! I just wanted to get out of the house and see something! The 4km WRF put a decent cell near Stratford by mid-day, and that's what I was banking on. Stratford, TX, here I come!

I left about 2:30 or so, and made it up to Stratford a little after 4. I saw a few towers to the W/NW, so I parked just north of town and watched for about an hour. A cell west of Stratford got going, and actually became severe when it reached Spearman. It was moving too fast for me to catch, so I resumed watching the storms to my NW. After a few minutes the storms showed somewhat of a base. They were moving SE, so I scooted south of Stratford on hwy 287. As was talking on the phone to John Harris, I noticed a quick forming mid level funnel, and I got a quick shot of it with the iphone. The funnel lasted no more than 30-40 seconds. The base became a bit more defined, and I took a few more pictures and called it a day.

Couldn't expect more on a day with such low expectations. I still love low risk days! They seem to like me a lot! Now to the photos: 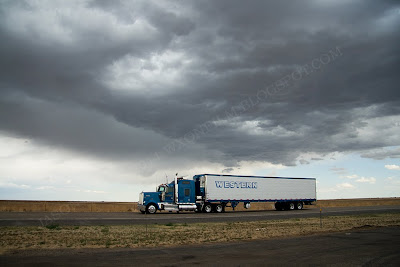 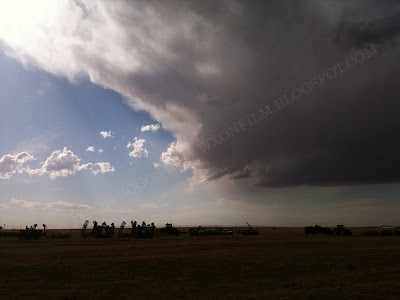 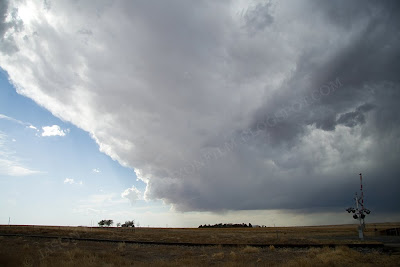 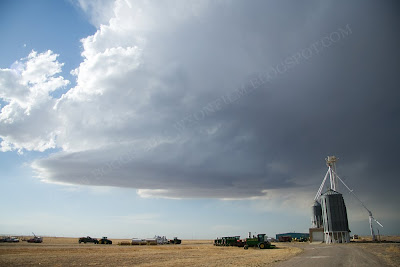 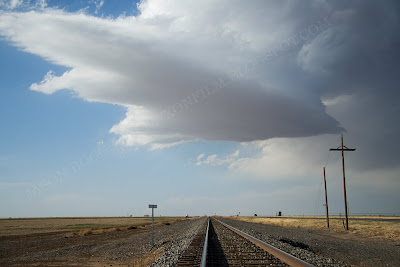 I had been eyeing this day for a couple of days and decided to pull the trigger to chase. It wasn't going to be a huge day, but it had potential. I left home about 12pm and targeted Lamesa, TX. I got a text and found out that my buddy David Drummond was just south of Lamesa at a rest stop. I finished lunch (Subway) and headed that direction. We met and shot the bull for about 30 minutes and saw towers going up near Midland. We decided to head that way, but after about 10 minutes on the road, the cells died out quickly. We decided to head back to the rest stop and continue to wait it out. After about 30 minutes or so, towers started forming to our south and southeast. We waited a few minutes and decided to go after them. We went east on 180 and made it into Snyder. We decided to get gas since towns are fairly sparse in the area. We looked at radar and the storm was severe warned. It didn't look too bad visually, but it had a fairly high base. We then decided to go north towards Rotan. We sat about 10 miles West of Rotan and watched the storm for quite a while. We saw plenty of CG's, and actually saw a fire started from the lightning. The storm looked ok but never really got it's act together. As light faded we decided to go into Rotan to see if the storm had dumped any hail in town. As we were looking at the storm to the SE, a farmer came over and started talking to us. He mentioned food and our faces lit up with enthusiasm. Right across the street from where we had parked was a nice little barbecue joint. We went in and were treated to some great sausage and brisket with some pinto beans and sweet tea. After that, we chatted a bit, and then I made the long trek back to Amarillo. All in all, it was a great chase, and I had fun chatting and chasing with David. 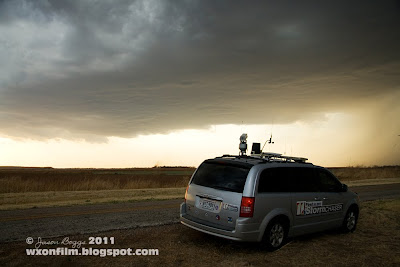 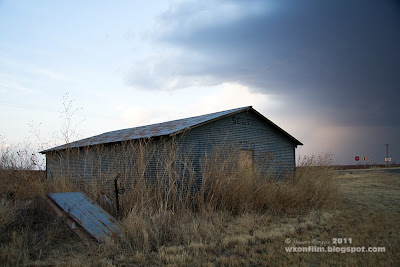 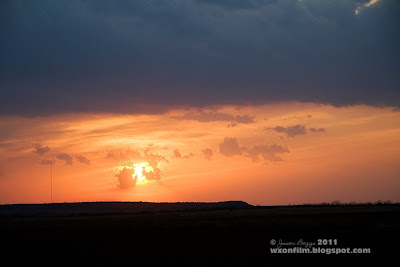 Started off the day at the NWS convention at the Amarillo Civic Center. Had lots of fun with the guys from the station and my chaser buds. It looked to be a possible chase day with Td in the 50's and a warm front hanging around the area. I stayed at the Civic Center until about 2:30 or so and then went home to take a short nap. That was my mistake. I got back up and saw convection SE of Plainview and scrambled to get to that area. A tornado warning was issued for the cell that was SE of Plainview, but I was just too late in getting there. I made it south of Plainview and saw the storm that initially had the tornado warning on it. It still had a pretty well defined wall cloud with it, but the light was fading fast. I then went back to Plainview and found a nice spot to watch the rest of the convection move to the north. All in all, it was great to get out for the first time in 2011 and see some convection and CG's which really helped with the SDS that I had acquired over the long winter months!

PHOTO #1 and #2: Convection near Plainview, TX 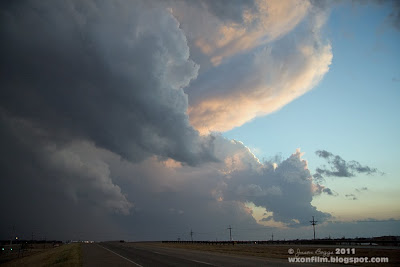 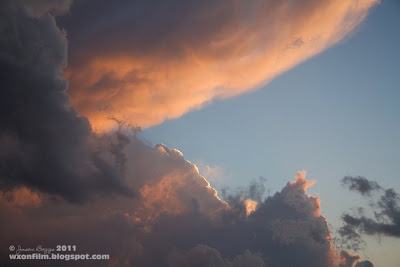 Posted by Jason Boggs at 2:29 PM No comments:

We finally got a few inches here in Amarillo. Actually, about 2-3 to be exact. This will definitely help with the wildfire concerns this year, but we need more. Went out and did a little snow driving in the Xterra for the first time this winter season. 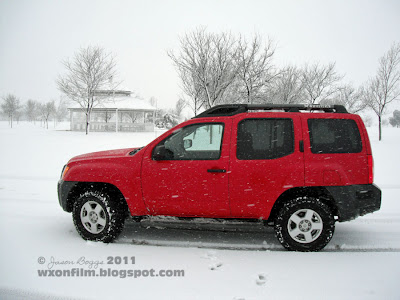 Posted by Jason Boggs at 9:17 AM No comments:

First of all, yes I'm alive and kicking!
Second of all, Jay McCoy said I need to update the blog, so this one's for you Jay!

It's been a dull winter around here! Two little snow events not really worth talking about, and that's about it. I'm not the type that posts about everything that goes on in my life, and even then, it would be pretty dull! Anyway, I've just been doing a little vehicle maintenance lately to get ready for 2011. Also, I got a filmtools window mount for my vid camera, so now I'll have more video in the coming season. I guess Facebook has taken over the majority of my posts, but I promise that I will have wx images on here as well as Facebook. I'm in no way giving up this site for Facebook...that's a promise.

Anyway, now that you know I'm alive, you can sleep better tonight! LOL
Posted by Jason Boggs at 8:32 PM No comments:

SORRY FOR THE LACK OF POSTS LATELY

Whew!!! I have been busy chasing lately among other things. I finally got this blog updated. For those that follow me, I apologize for not being more consistent in my posts. For those of you that chase and maintain a blog, you know how hard it can be to stay current.

Now, enjoy my recent chases and photos from the past couple of weeks!
Posted by Jason Boggs at 10:02 PM 2 comments:

All I can say is WOW!!! ABSOLUTELY THE BEST CHASE OF MY 12 YEAR CAREER!

Another slight risk and t-storm watch did it for me again! Boy, I'm still all giddy inside! Met up with friend Dan Skoff in Guymon, OK and he left his vehicle and jumped in with me. We actually targeted Campo, CO (believe it or not). Got west of Campo and saw a brief funnel (later found out it was a tornado). The storm looked ok, but never really looked like it was going to put down a significant tornado. We found out differently after we got south of Campo a few miles. We were actually looking at rotation SE of Campo. We pulled over and I happened to look to my NW and saw the long funnel touch down about a half mile or so to our W/NW. It was coming straight at us, so we had to blast south a little ways to get out of the path. At times, we got hit with RFD winds of at least 75-80 mph and maybe higher. We followed the storm to Guymon and saw at least 3 more tornadoes as we followed it back. In 12 years of chasing, it's the best chase of my life. Being a chief met in Fayetteville, AR, Dan hasn't seen a good daytime tornado in 10 years. That came to an abrupt ending today! Everything went absolutely perfect for us today. I took all stills of the event, and Dan took the video. This is the best tornado I've ever seen! Oh, and it's the first tornado I've ever seen in Colorado.

Tornadoes like this make all the negative factors of storm chasing worth every minute.

EDIT: Forgot to mention that is was absolutely great to finally meet Lou Ruh and Dr. Jason Persoff. 2 very genuinely nice guys that make a storm chase even better! Like I've said before...tornadoes are great, but meeting awesome people on a chase is something I'll always cherish.


PHOTO #1 DAN SKOFF GETTING VIDEO OF THE STORM WEST OF CAMPO, CO
PHOTO #2 ANOTHER PERSPECTIVE FROM DAN SKOFF
PHOTO #3 DAN SKOFF POSING WITH A NICE LOWERING WEST OF CAMPO, CO
PHOTO #4 THE FIRST THING IS SAW WHEN I LOOKED TO THE NW. I BARELY GOT IT OUT, BUT I SAID...DAN A TORNADO. I REALLY COULDN'T BELIEVE IT.
PHOTO #5 IT GOT BIG VERY QUICKLY. TAKEN ABOUT 3 or 4 MINUTES AFTER THE FIRST TORNADO SHOT.
PHOTO #6 PROBABLY THE BEST WEATHER PHOTO I'VE EVER TAKEN. I CAN'T THINK OF ONE THAT TOPS THIS ONE. JUST A CLASSIC TORNADO PHOTO IF YOU ASK ME.
PHOTO #7 TORNADO AS IT'S PICKING UP A LOT OF DIRT AND CROSSING THE HIGHWAY
PHOTO #8 A RARE PHOTO OF A TORNADO AND RAINBOW IN THE SAME FRAME 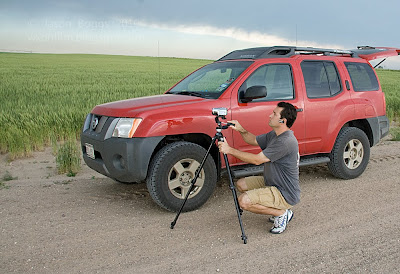 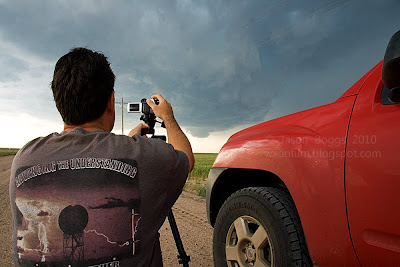 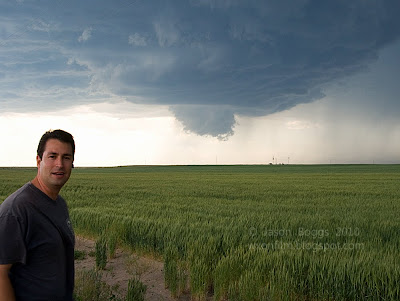 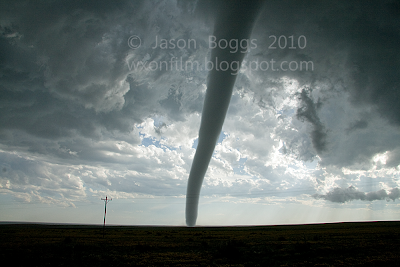 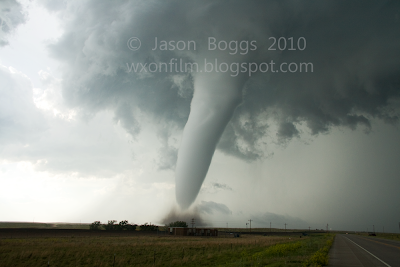 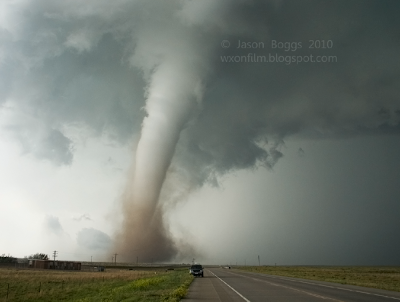 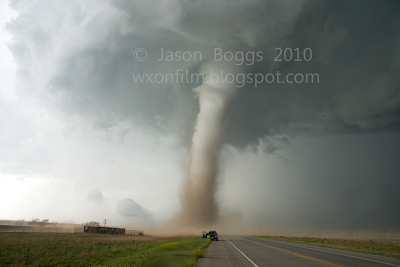 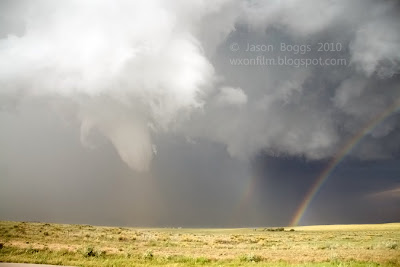 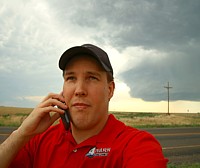 Jason Boggs
I'm a storm chaser and amateur photographer from Amarillo, TX. I have a passion for weather and an interest in photography. With these two interests intertwined, I hope to bring you photographs and video from a complete spectrum of the weather world. I shoot most of my images with a Canon digital SLR camera. However, I do shoot some video because I chase storms for a local tv station. When Mother Nature isn't cooperating, I will post random thoughts, and I will also post random photos from the photography excursion that I sometimes go on. Finally, I also discuss forecast decisions on a possible chase day. I will keep this blog updated as much as possible. Hope to see you again!